The Road Less Taken: The Lincoln Highway in Eastern Ohio

I do so love old highways, especially those that have become byways, bereft of their numbers.  How much people miss by not taking just a bit more time along the way!   As mentioned in earlier postings, I grew up just off the former Lincoln Highway–the original 1913 route–in northern Indiana, very near to an early roadside landmark still standing (albeit changed some), the old Bob’s Corner, which stood on the north side of the Lincoln Highway at the junction of what later became two major highways, US20 and State Road 2.  Decades ago the junction, always dangerous, was moved a good ways east and proper traffic lights added, leaving the abandoned stretches of 20 and 2–the Lincoln Highway–to become Oak Knoll Road.  My family and I continued to use the old way, shaving off a good mile or so and avoiding the traffic light to and from LaPorte.

But I digress, which, of course, is the whole point of taking old roads.

The Lincoln Highway, a coast-to-coast route from New York to San Francisco, was the ambitious dream of Indianapolis entrepreneur Carl Fisher, a man known for his grand visions.  (Among other things, he and his partners founded the Indianapolis Motor Speedway and later, Miami Beach.)  In 1913 Fisher, long a promoter of automobiles, formed the Lincoln Highway Association.  The plan, audacious for its day (long before numbered routes), was for a clearly marked improved road across the nation.  By 1915 the route was complete, if not the actual improved roads.  A film of the entire length of the Lincoln Highway was made and shown at the Panama Pacific International Exposition in San Francisco that year.  The route of the original Lincoln Highway roughly (very, in several places) follows old US30, that is, except in Indiana, where the original 1913 route swoops northward to catch Goshen, Elkhart, South Bend, and LaPorte.  The revised 1928 route through Indiana did indeed follow mostly what is today old US30 through towns such as Warsaw and Plymouth.   Both routes became part of the Indiana state byway system last year.  Ohio’s portion of the Lincoln Highway in all its variant routes is part of a similar system.

Of course I’ve been all over Indiana’s routes, and over time and numerous trips, I had covered virtually all the spiderweb of routes of the Lincoln Highway in Ohio as well, except for the easternmost counties beyond Massillon, where, as in many Indiana towns, the main street is called Lincolnway.  In earlier posts I mentioned some of the joys of the route from Van Wert, not far from the Indiana line, eastward through Wooster, home to a fabulous Hungarian pastry shop and Books in Stock, a shop in which to lose yourself for hours.  I longed to see that last stretch of the Lincoln Highway that threads through Canton and beyond enters a wonderland of foothills, agricultural delights, and forgotten little towns.

And I had wanted to explore further the city of Mansfield, home to the Kingwood gardens (read about it here Home), a wonderful accidental discovery during one of those earlier Lincoln Highway diversions.  The first time I saw this it was late in the year and so there was no admission charge.  Endless gardens–not to mention hungry peacocks!  On its northeast side Mansfield also boasts the massive architectural wonder, the Ohio State Reformatory (Experience One of Our Nation’s Most Historic Treasures – Mansfield Reformatory Preservation Society) dating to the 1880s.  The city’s downtown, smack on the original Lincoln Highway, boasts many wonderful buildings and some interesting revitalization efforts.

But I also had a yen to return to an old tourist attraction that my family visited before I was five: Ohio Caverns, which was the kernel of another recent post (http://gloryjune.com/wordpress/?p=118 ).  The cave is northeast of Dayton amidst rolling farmland, so I planned a route incorporating the old National Road (US40, mostly) into Ohio, then northeastward to Ohio Caverns, and then continuing up to meet the Lincoln Highway at Bucyrus with a night stop in Wooster and breakfast the next morning at Tulipan Hungarian Pastry and Coffee Shop, good plan!

Starting eastward from Bucyrus, a county seat town (famous for its bratwurst!) on the Sandusky River, we watched for all those roadside artifacts that spoke of the Lincoln Highway’s heyday, such as the occasional road marker or something more esoteric, like this barely visible abandoned drive-in theater on the 1928 route via Crestline. 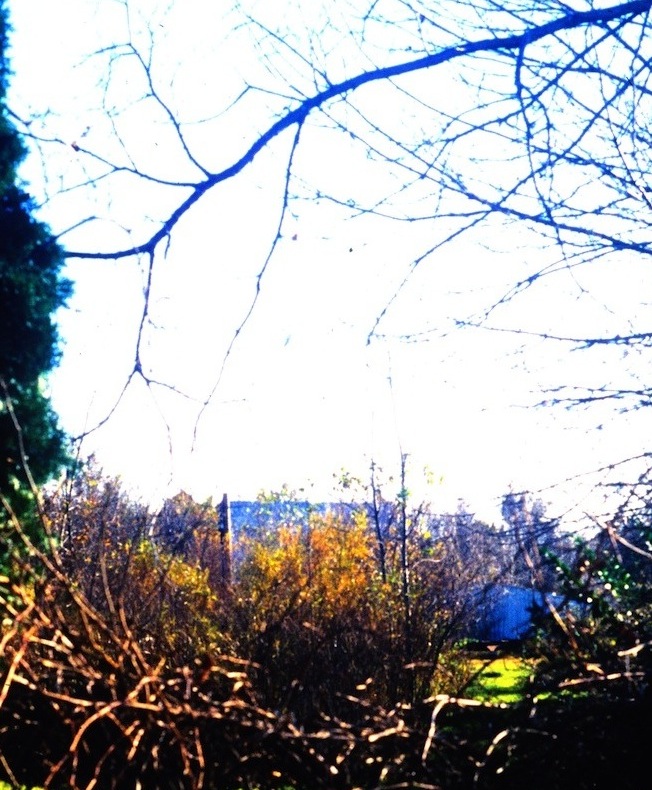 Much like Indiana and Illinois–and no doubt most of the other states this historic route traverses–Ohio’s Lincoln Highway diverges into multiple roads as the routes were refined over time or a town clamored to be included.  (Few part ways as much as the two main routes of Indiana’s section of the Highway, however.)  Earlier variations of the Lincoln Highway between Bucyrus and Mansfield wound through Galion, and it is a pleasant alternate route worth taking.

Most of the time what was once an old highway that has lost its official status is fairly obvious to me.  These roads shout out their former import in the way they are laid out, their width, and as I mentioned, evidence along the roadside, both glaring and subtle.  There might be the occasional Lincoln Highway pillar–a few do survive–or a barely visible remnant of a roadside park.   The architecture may suggest the heyday of the highway.  I  rarely listen to the radio or converse with my fellow traveler in the midst of these excursions, preferring instead to hear the road’s song.  It never grows old, although it is timeless.

The route through Crestline takes one into Mansfield north of the main drag but eventually goes to Park Avenue, passing the afore-mentioned Kingwood Gardens.  We decided to stop and see the peacocks, who evidently remembered that we’d fed them in the past. 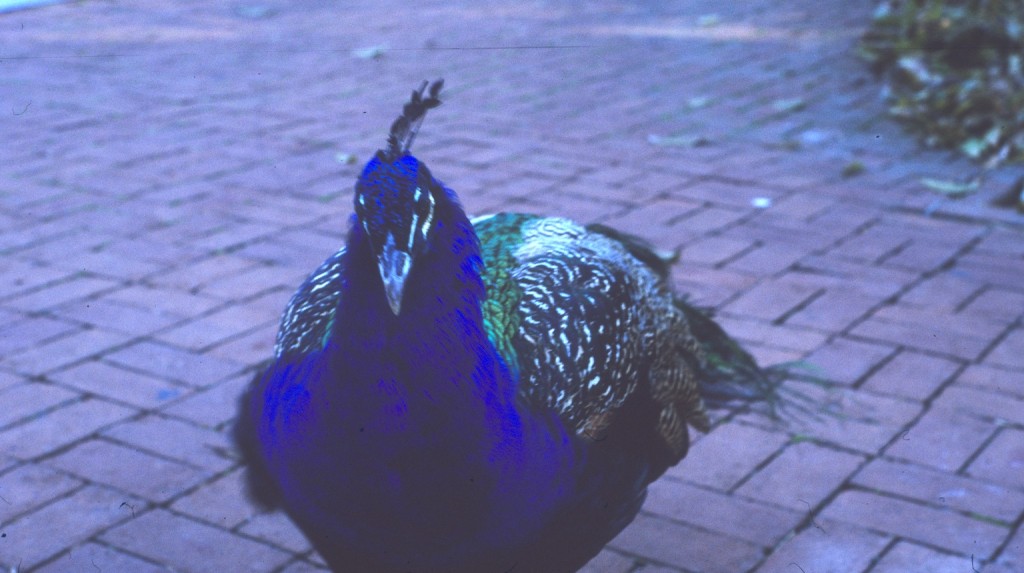 After threading through Mansfield, the Lincoln Highway to Wooster is a very pretty stretch, as I’ve mentioned in previous posts, winding through woods and farms and little towns like Mifflin and Hayesville.   We stopped to eat at the Oak Park Tavern, a roadside supper club near Mifflin dating to 1940 (read about it here:  Oak Park Tavern ) and spent the night in Wooster.

The next morning, fortified with a wonderful breakfast of rolled omelets at Tulipan ( Tulipan Pastry and Coffee Shop ) and armed with a couple of Hungarian open-faced sandwiches for the road, we set off toward Massillon and the unknown Lincoln Highway beyond.  I was delighted to discover another Twistee Treat (mentioned in an earlier blog http://gloryjune.com/wordpress/?p=92) on the east side of Massillon.   Two within a few miles on my favorite highway!  Cool!  These ice cream cone buildings are wonderful examples of mimetic roadside architecture and evoke a much earlier era than when they were actually built.

In the once-industrial city of Canton, probably known best as the home of the Pro Football Hall of Fame, the Lincoln Highway is Tuscarawas Street, the main drag, which boasts a number of architectural gems.  But beyond this urban diversion, adventure beckoned, and it was easy to feel the wonder of the early road.   In the days before road maps, how did an intrepid automobile traveler find his way?  The Lincoln Highway, as did others, offered guidebooks that relied heavily on landmarks and mileage.  A compass would have been useful, too.  But also there were concrete markers placed at intervals.  Here is one of several that survive in Ohio, this one about five miles east of Canton.

This was only one of a seemingly endless stream of early road artifacts in this section of the highway, which grows ever more hilly as one travels east.  The road laughed and so did I at the joy of discovery.  Numerous old, mostly former, 1950s-era motels appeared; there were more concrete markers, and most intriguing of all, several short abandoned segments of the original highway, paved with brick and wide enough for a Model T.   Bumping along these, time travel becomes real. 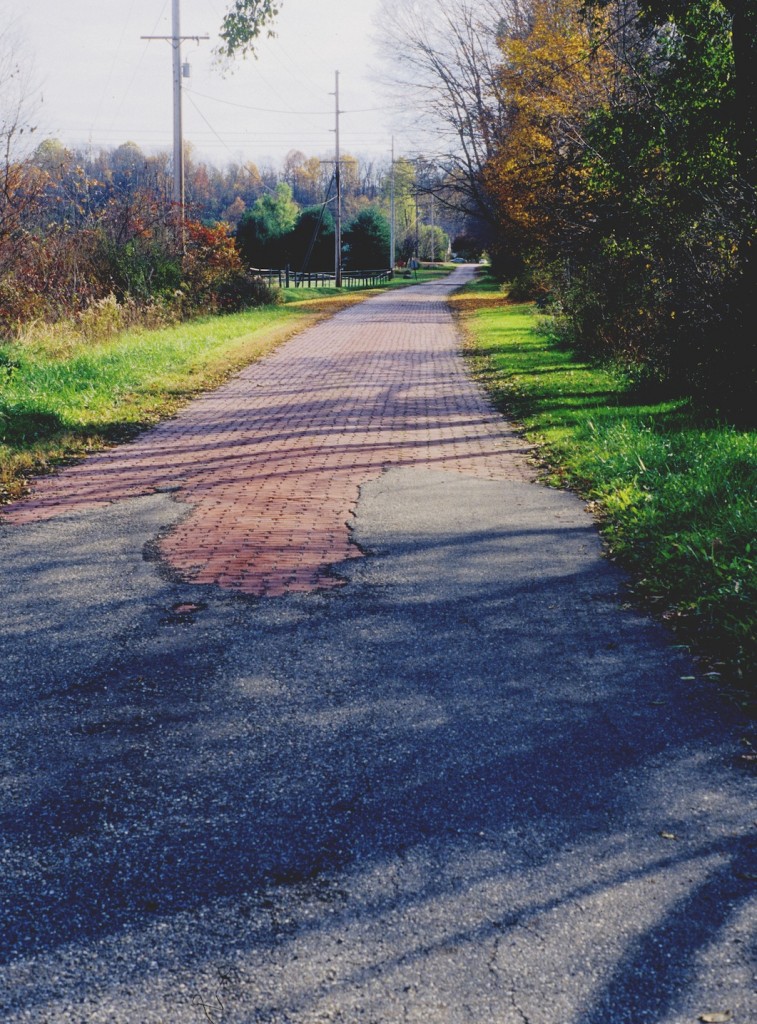 The charming town of Lisbon, the Columbiana County seat, was worth a brief stop to admire the courthouse and other interesting 19th century buildings.  Ohio’s portion of the Lincoln Highway ends sixteen miles farther on in East Liverpool, situated along the fabled Ohio River across from West Virginia.  Here once thrived an immense ceramics industry, fed by the wonderful clay found in this region.  Almost all the scores of factories are gone now, and the two that I knew best (given my fondness for 1930s kitchenware), Hall and Homer Laughlin, have merged.  But the story is still told in the Museum of Ceramics, housed in the city’s glorious former post office built in 1909.  It is a fascinating place, displaying examples of all the pottery and china that was once made in the area (read more about it here: http://www.themuseumofceramics.org/index.html ).  Lifesize dioramas illustrate the manufacturing process.  The museum gets little funding, but boasts a dedicated and very knowledgeable staff.  Listed in the National Register of Historic Places, the building, hardly a block from the river, stands on the highway that was created four years later, with a concrete marker in front of the entrance to prove it.   Not terribly far from it is the Hall/Homer Laughlin factory outlet, at the site of the Hall factory; the Homer Laughlin factory, home of Fiesta ware, lies just across the river in West Virginia.  Tours are possible, but for another day.  East Liverpool deserves more exploration as well.  Always something to call me back! 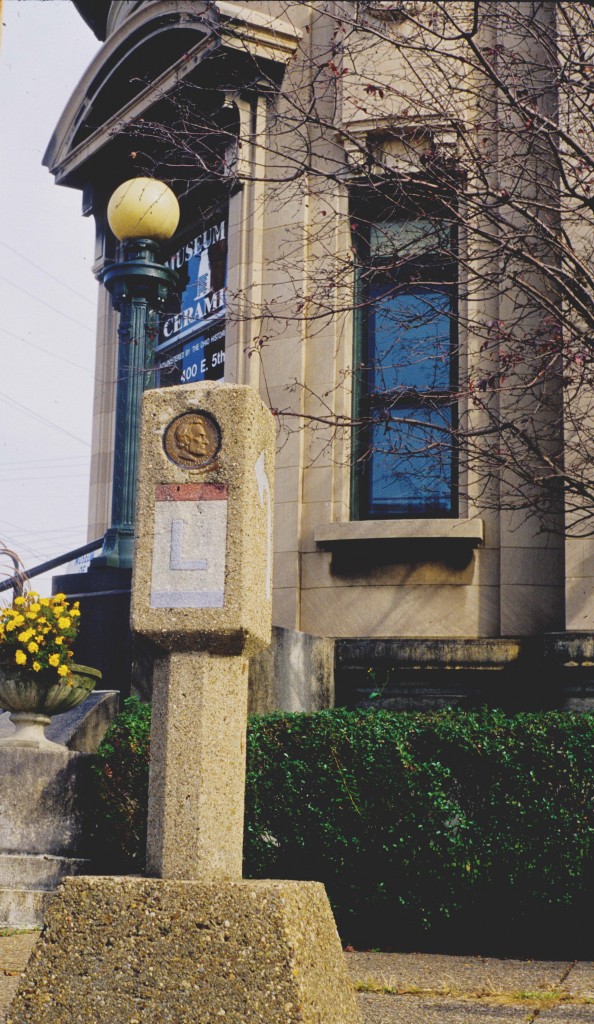 This entry was posted in Following in My Foodstops, On the Road Less Taken..., The Wonder of It All and tagged Lincoln Highway, Ohio, road food, roadside attractions. Bookmark the permalink.

3 Responses to The Road Less Taken: The Lincoln Highway in Eastern Ohio