My Mother Never Warned Me about the House on the Rock

For years I have loved south central Wisconsin, a beautiful land of lakes and rocks and rivers. Within a fifty-mile or so radius of Madison are many wonders, both natural and manmade, and I have wandered the old roads about there through the decades. Early on the famous Wisconsin Dells was a destination for my family; sadly I discovered it has become a distorted playground of water parks and endless taverns, no longer the seemingly innocent tourist area of souvenir shops and amusements adjacent to the natural beauty of the Dells that had been the real draw in my youth. The Dells, fantastic stony bluffs and formations along the Wisconsin River, are, of course, still there, but I wonder if visitors even bother. Later, living in Chicago, I sometimes ran off to meander the winding roads, passing through charming towns such as Lodi, or stopping to hike at Devil’s Lake State Park. 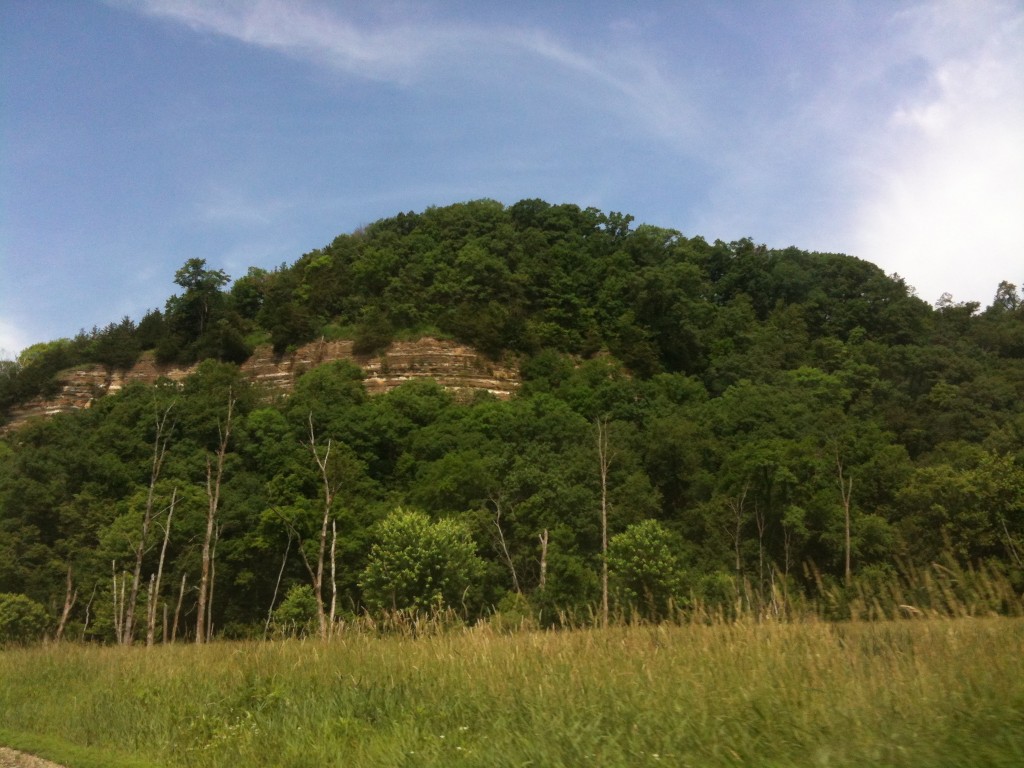 Now that I live the better part of a day’s drive away, my occasional trips to Wisconsin have been pilgrimages of sorts. Once it was to see Taliesin, fabled home of master architect Frank Lloyd Wright near Spring Green; other times, to marvel at the International Crane Foundation, which keeps breeding pairs of all fifteen of the world’s cranes and works to restore their habitats, and also to commune with the spirit of early environmentalist Aldo Leopold at his legendary Shack nearby in the Wisconsin River floodplain.

There was one major attraction I had always missed but had always wanted to see. Indeed, I had passed very close to it on my way to Taliesin (now there is a building with which I can dance!) Although I have been aware of it most of my life, apparently The House on the Rock near Spring Green is well known only regionally. My parents went to see it once, I think, and later my widowed mother went there with a busload of seniors from her home in northern Indiana, where I grew up. Mom never spoke all that much about it, only to recommend it as fascinating and that there was a lot to see. Oh brother! What an understatement.

I have always embraced architecture and museums of many sorts. I am a public historian, after all! But what is The House on the Rock anyway? Is it a museum of amazing artifacts of history and popular culture in dire need of a curator, or a massive interactive art installation? Or perhaps a great mischievous joke on the public? Yes. It is all those things. I doubt I will ever return, but I will never forget it. P.T. Barnum would have loved it!

It begins innocuously enough, although there are hints. The House is, as advertised, built upon a chimney rock overlooking the Wyoming Valley and reached by meandering rural roads south and west of Spring Green. At the entrance to the property and at intervals along the lengthy winding drive leading to the house are huge, vaguely medieval, vaguely Oriental urns. With dragons.  I really was not sure what to expect; the brochures are cryptic, although not obviously so. The website was no better. Let us simply say that they leave a lot out. There were multiple large parking lots amidst trees and flower plantings and more urns. 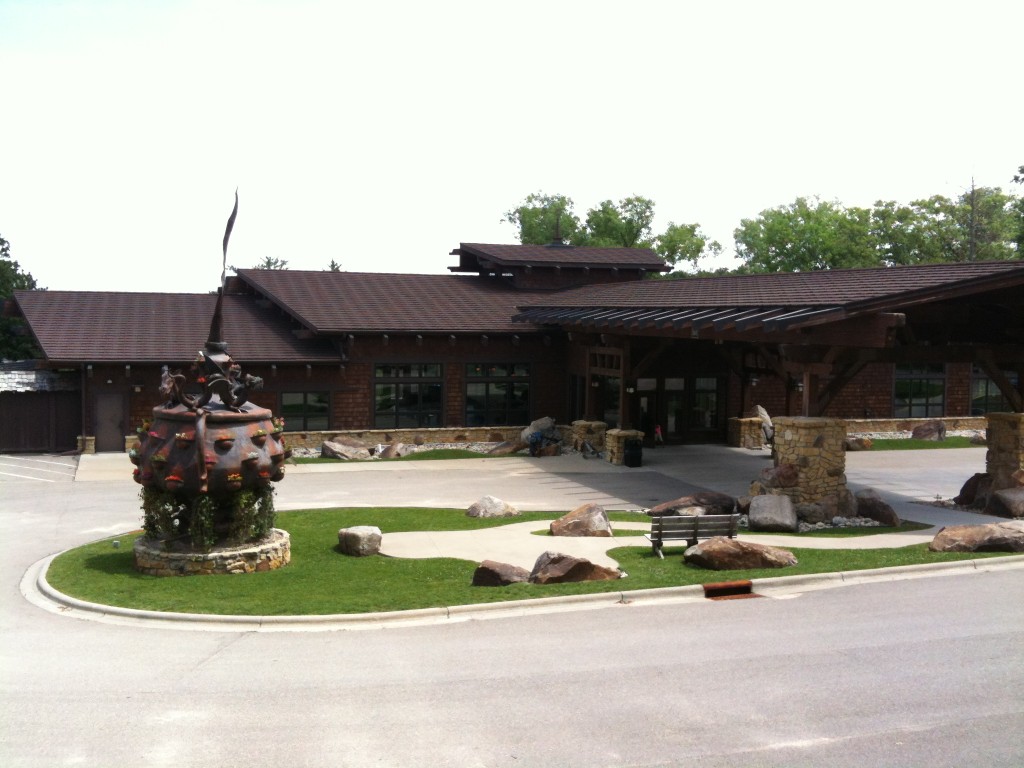 Surrounded with flowers, the visitor orientation center, apparently one of the most recent buildings, offers views of the property, ticket counters, a gift shop, and a sizable exhibit on Alex Jordan (1914-1989), the builder of The House on the Rock. The story is that Jordan found this beautiful site in the 1940s and gradually built a weekend retreat, supposedly never intending it as anything else. But he kept building, kept collecting things (he may have been the world’s greatest hoarder), and people were curious, so he began asking a nominal fee for admission. And it grew from there. And it grew. And it grew.

Admission tickets are sold in sections or a special price for the entire attraction; the latter seemed to make sense, since a return trip was not likely. Material I had read said to allow at least three hours (ha!). The first section was the original house and additions; it felt like a combination treehouse and cave, which may make no sense until you see it. It was dark and shadowy and labyrinthine, with an overabundance of antique you-name-its on display on dimly lit shelves and in nooks and crannies all around. It is in this section that one finds the famous Infinity Room, one of the last additions to the House under Jordan’s ownership. 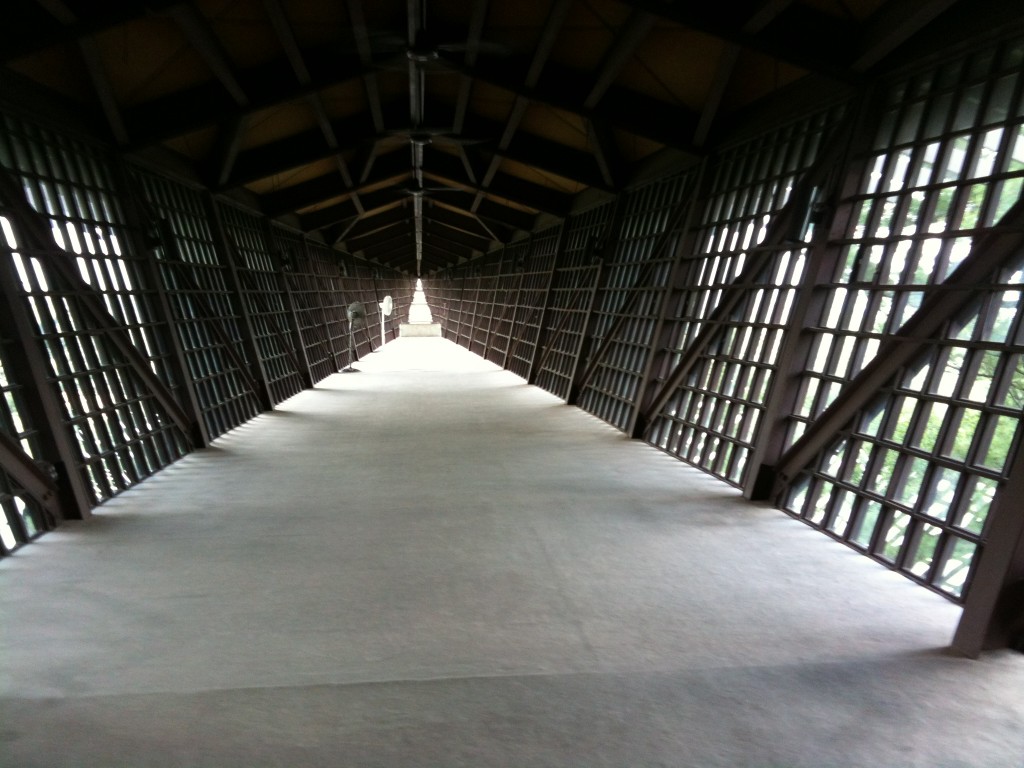 “Stumbles upon” may be a better term; the passageways are twisted and multi-leveled, and it is dark! I cannot imagine my mother and her fellow seniors, even in healthy shape, rambling about in there. It seemed the only way out was to go back the same way.

The second section–and there is a ticket taker at the beginning of each–is in a separate building, or series of buildings, leading into a recreated turn-of-the-[20th]century street. I should at this point note that there are restrooms scattered throughout the site, and each is filled with collections or concoctions as well. The entrance is open so that men, too, can at least glimpse, 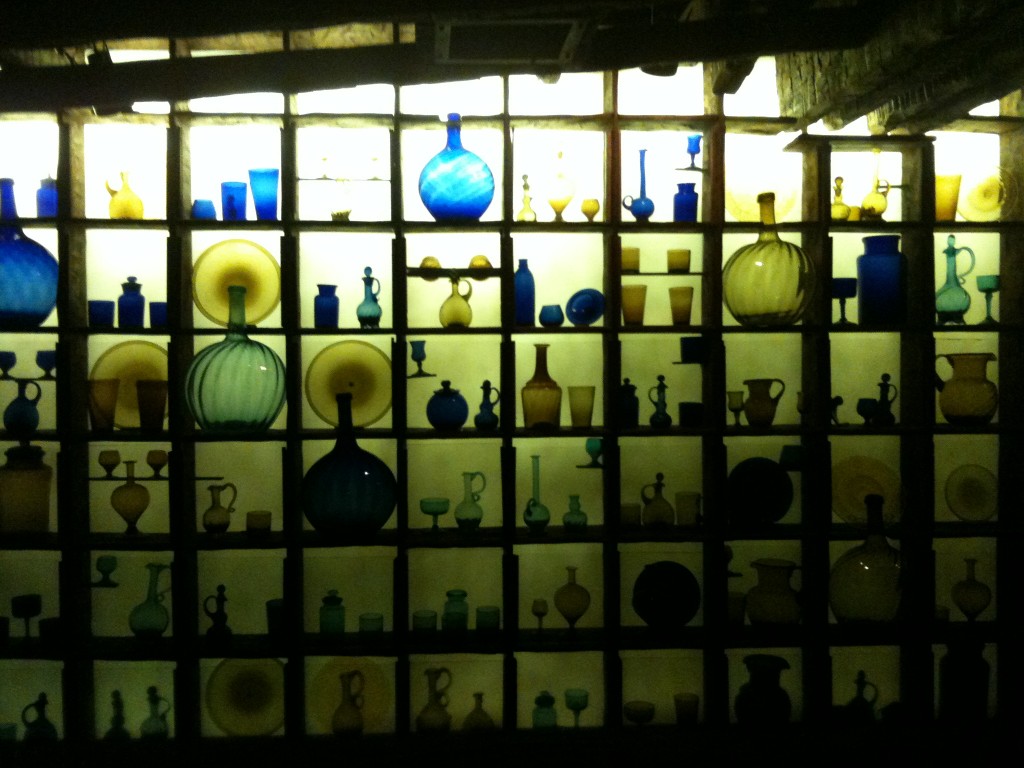 for example, this artful display of glassware in the ladies’ room before The Streets of Yesterday.

Yesterday’s streets, which of course are dark and somehow seem a little odd compared to those you may have seen in other museums, gradually lead you to an array of mechanical coin-operated animated musical devices. They take tokens that you purchase when buying your tickets. 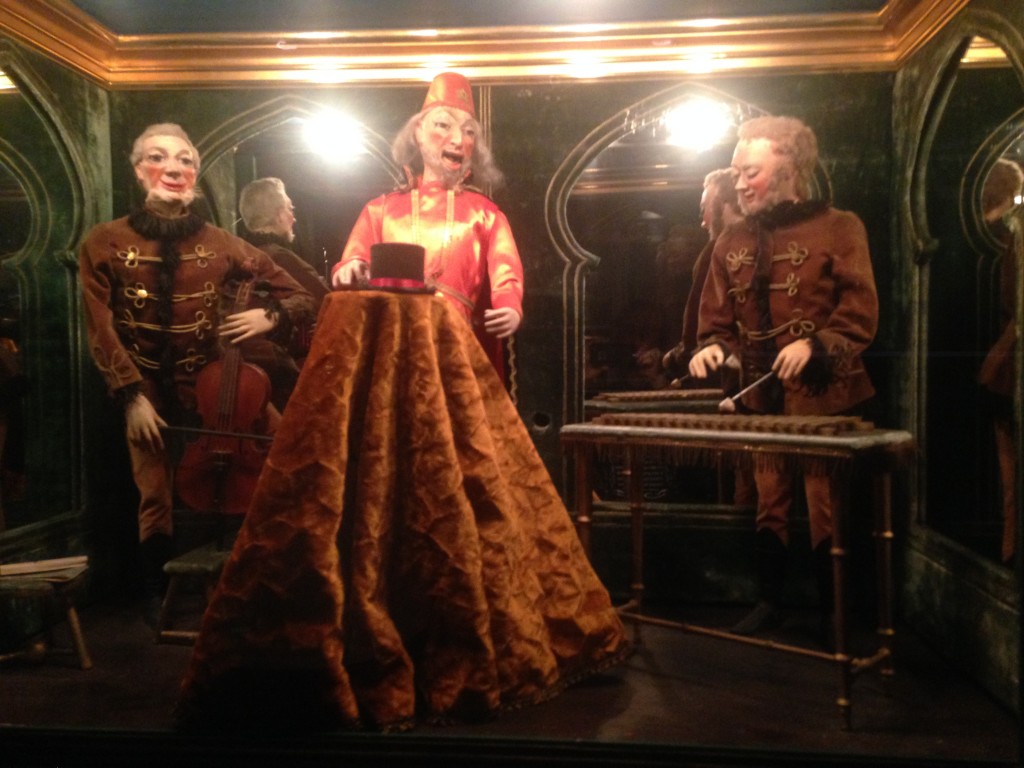 At first I was charmed, for I have seen a fair number of entertaining antique musical devices, and this seemed to be a marvelous collection, albeit ill-maintained. Then I was awed, for down the passageways were orchestrions that then merged into room-sized contraptions; then there were rooms filled with orchestras of various instruments, playing, seemingly, by themselves. Most were a little or lot out of tune, adding to the growing feeling of unease. And so much, so many, too much! 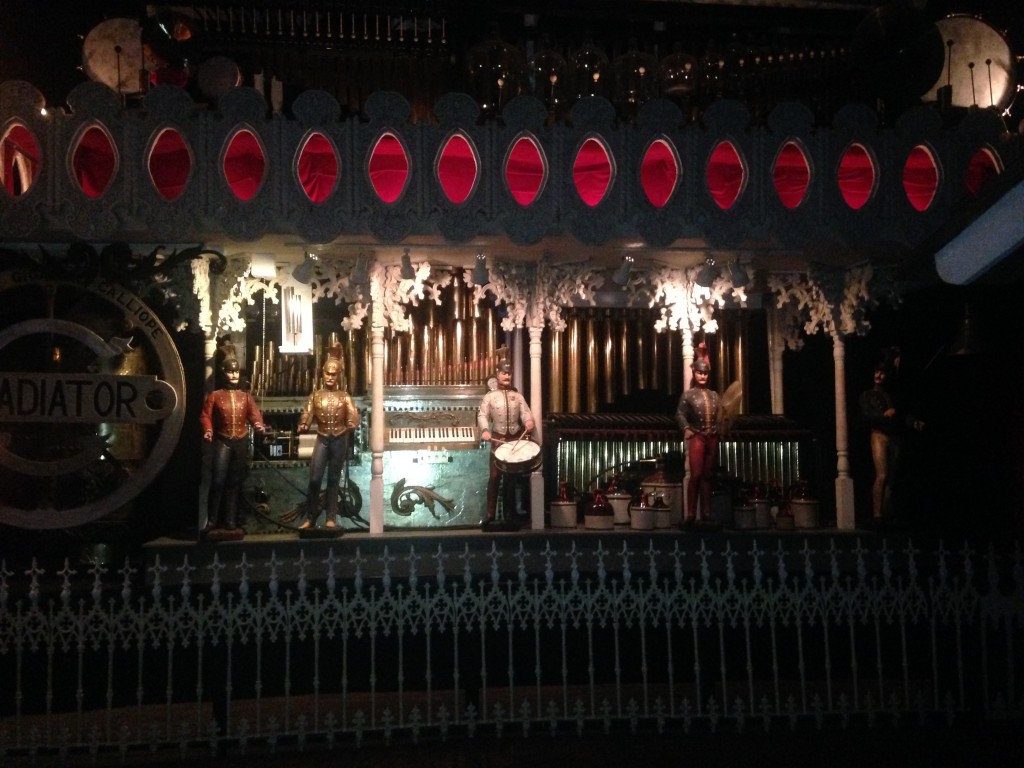 Indeed, the order of things is lost in my mind, and there were no maps. Was the vast space that displayed the 200-foot sea creature(!) in mortal battle with a giant squid before or after all the mad music? The scale of the diorama, if you could call it that, was imposing. The walls of the room displayed endless cases of priceless nautical artifacts–or were they?–including a sizable collection from the Titanic. From there, I think, the passages led to another huge space filled with various relics of transportation. All, everywhere, was shadowy, and everywhere was. . . stuff.

But also here, incongruously, in what felt like an underground cavern, was a cafeteria and a little ice cream shop, a place at last to rest a bit, for the walk by this time could be measured in miles–or so it seemed, what with endless climbing and clambering. Later there was another resting place (with a few concessions available) that overlooked the Wyoming Valley from beneath the Infinity Room. On the hillside, by chance, I trust, a few deer grazed, a most welcome dose of reality. 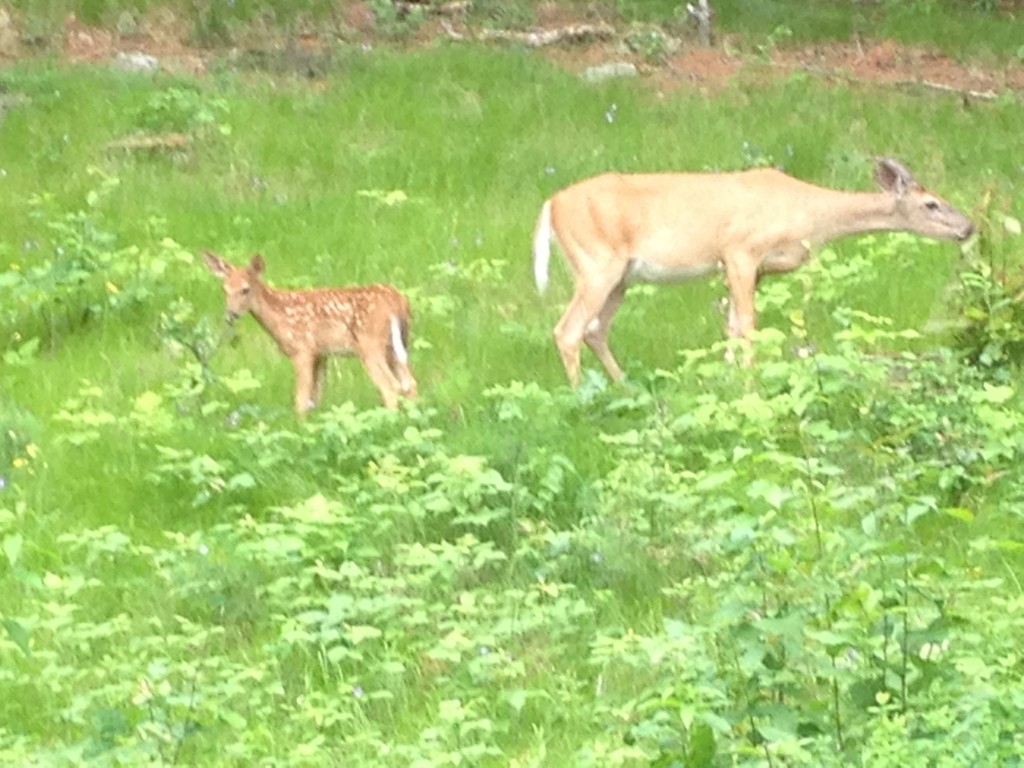 The third section perhaps was strangest of all. Here surely would be “the world’s largest indoor carousel,” something I had been eager to see this entire “long strange trip.” The passage opened into another huge space of several levels. A portion of the walls was entirely covered with dusty carousel horses. My historian heart cried out in dismay. Indeed, this room would shatter it. The whole experience had become as a dream, bordering on nightmare. There stood a three-story carousel ceaselessly whirling–and you can’t even ride on it! Instead, it is a huge assemblage of carousel animals, including not one horse, all torn asunder from their origins–or are they? Perhaps they are simply very accurate reproductions. All around the carousel loomed large machinery, created of pieces of other machinery, even an Edison dynamo! At the other end of this Stygian expanse was a gargantuan cannon. Maybe. Who knew what was real at this point?

But even that dungeon of delusion was not the end. The way out led through rooms full of old animated circus displays of several scales, another of endless dolls, yet another with a amazing collection (these were real, I’m certain) of early 20th century animated window displays for jewelry shops. Apart from some signage explaining the window displays, there was no interpretation. I struggled for air. At last, after hours at a furious pace, we had made it through. But even outside there were odd relics–or fakes–all surrounded by riotously blooming gardens. 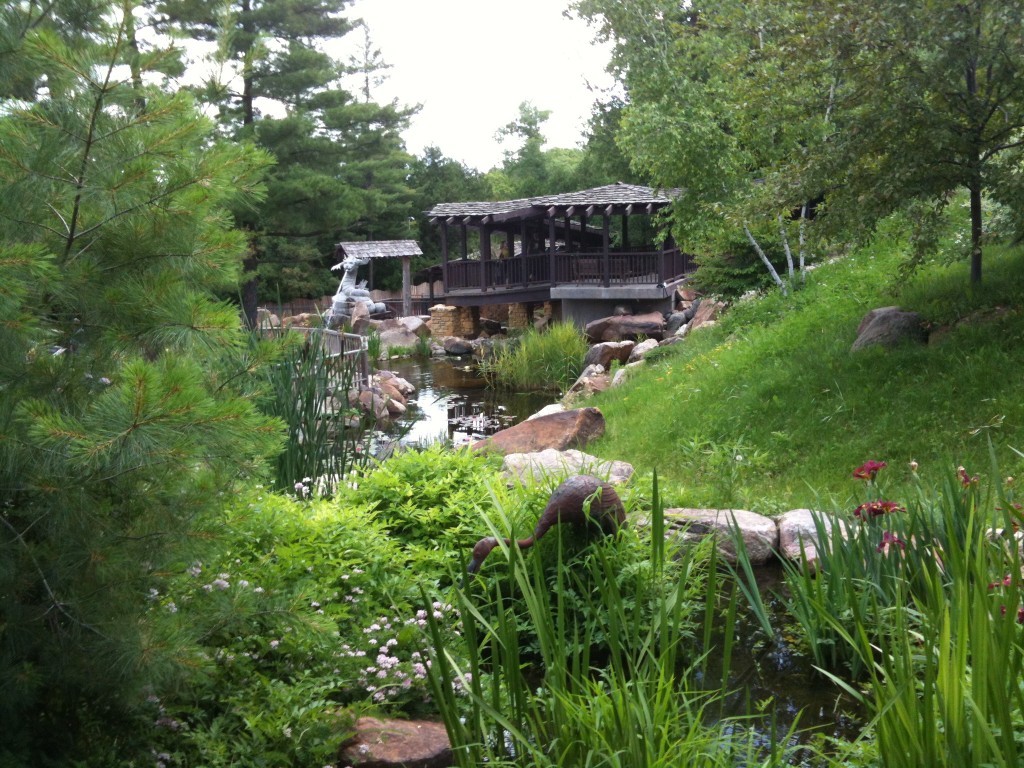 That’s the thing. There is a reason the House on the Rock is so dark within. It’s all part of the illusion. 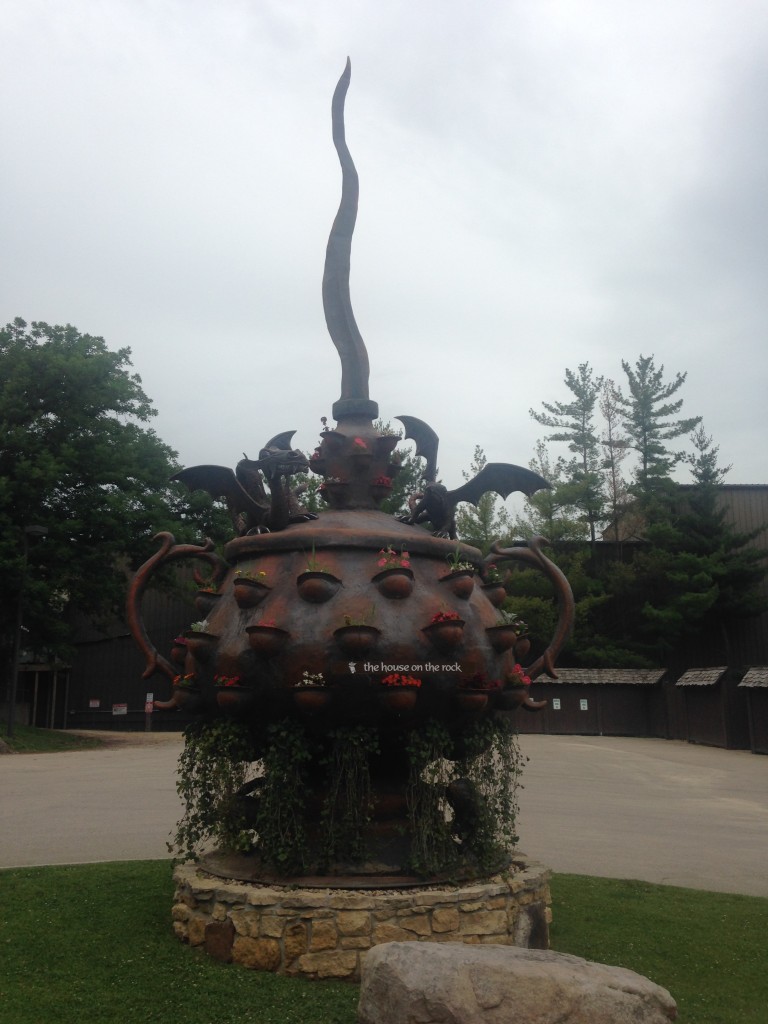 This entry was posted in On the Road Less Taken... and tagged carousels, roadside attractions, The House on the Rock, Wisconsin. Bookmark the permalink.