Following in My Foodstops: Lost in the 40s

People are forever asking me “what’s a good place to eat in _______?” They assume that, since my work and wanderings take me all over the state of Indiana and beyond, I have amassed at least a mental list of favorite places. Well, I have, and I’m always on the lookout for more.  Although I certainly am not averse to gourmet food and healthy fare, on the road my budget, time frame, and inclination tend to favor old-fashioned family-owned places.

This weekend took me northeastward, where I attended the 58th annual reunion of CCC Company 556, the boys who built Pokagon State Park from 1934 to beginning of World War II. They deserve the attention of a separate article, which I’ll be posting soon. The first foodstop was Powers Hamburgers in Fort Wayne, located in a great little late Art Deco building on Harrison Street downtown. Now, you would rightly assume that chains are normally off my list, but small localized chains may qualify. Powers actually began in the mid-30s in southeastern Michigan, expanding to perhaps a couple dozen, building the first Fort Wayne restaurant in 1940. Ultimately there were three in Fort Wayne, including another Deco-ish one on the old Lincoln Highway, but this one is the sole survivor. (At least one of the Michigan stores survives in Port Huron, but it’s paired with a pizza joint.) It was the design of the building that first drew me in years ago. You might think that Powers is just another of those White Castle knockoffs that flourished in the 1930s-1950s, some of which are still around here and there, but you would be wrong. The Powers hamburger starts with a scoop of real ground meat, rather good meat, in fact, and is grilled on order. Each burger is smothered in freshly chopped onions. These are smallish–they’re served on large dinner rolls–but they are heftier than you might think. I recommend their malts. If you’re thinking of a sweet treat at the end of your meal to counter all those onions, Powers offers a variety of baked goods from the New Haven Bakery northeast of town (which I’ll be writing about soon in an article on great small town bakeries around the state). We left Powers with opened sinuses and satisfied tummies. I can even say that the Powers hamburger can be just what the doctor ordered. Some years ago, on my way back from a job a couple counties to the north, I was coming down with a severely painful sore throat that felt just as if I had swallowed ground glass. I stopped at Powers and the hot peppery burgers with all those onions made my throat feel much better. Of course it is true that onions have antiseptic qualities. Perhaps a Powers burger might be considered health food! 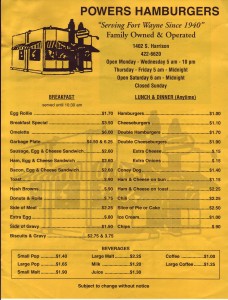 Suppertime found us in beautiful Marshall, Michigan, sitting amidst the fireflies outside the Hi-Lite Cruz-In on the far east end of Michigan Street (formerly US112), well beyond the historic downtown. A large chunk of Marshall is designated a National Historic Landmark, most of which is mid and late nineteenth century. But the Hi-Lite opened in 1946, certainly historic in my book!  It’s been expanded some over the years, and boasts a nice patio with several tables and chairs. Part of it is built around a huge glacial rock that evidently was just too big to move. Hi-Lite offers good drive-in food, much of it homemade, like their barbecues and delicious sloppy joes (miles above what we used to have in school!), not to mention their wonderfully creamy root beer. This time I tried their homemade chicken salad with grapes and almonds, quite good! I recommend the thick onion rings, too. There is limited counter seating inside, and of course, curb service in your car. And yes, you can find them on Facebook.

The final foodstop, a very late lunch the next day, was Clay’s Family Restaurant, teetering on the Indiana-Michigan border overlooking Lake George. It’s just a few miles north of Pokagon State Park on old US27. “A Steuben County tradition” since the late 1940s, Clay’s is simply my kind of place, loaded with charm and tasty traditional fare. They have a good soup and salad bar with two choices of homemade soup (the vegetable soup is so thick it is almost a stew!) and lots of fresh vegetables, along with some of the traditional favorites such as macaroni salad. The sandwiches and entrees are tasty and generous, but the pies–ah!–are not to be missed. Their website (Clay’s Family Restaurant) boasts that “you’ll want to come back again and again!” And indeed I do.

This entry was posted in Following in My Foodstops, On the Road Less Taken... and tagged road food, roadside attractions. Bookmark the permalink.

3 Responses to Following in My Foodstops: Lost in the 40s